In this post, we share the creation process of Metaview Wrapped, as an example of how Metaview experiments with ideas, and how we ‘Do Things That Don’t Scale’.

At Metaview, we help companies run amazing interviews. We achieve this in a number of ways including training interviewers with automated interview shadowing and coaching them with personalized, contextual feedback.

To do that, we are building a SaaS product, at the cutting edge of conversational AI. The Product Operations team at Metaview often runs experiments and does things that don’t scale, but more importantly does things that will delight our customers. In this blog post we discuss the creation of ‘Metaview Wrapped’, a video we generated for our customers to share their interview highlights over the year.

One of our operating principles is to ‘Optimize for rate-of-learning’. This means that we treat learnings as the highest form of currency for delivering future impact. We run experiments, question thoroughly, and talk to customers over and over.

Last December, as the festive period approached, we ran one such experiment. Inspired by Spotify Wrapped, we decided we would attempt to create a short video for each of our users, summarizing interview data from interviews they had run during the year. After all, Mariah Carey did once say something along the lines of, ‘All I want for Christmas is personalized data-driven interview insights’ - I think - although I’ve not heard that song in while. We called this video ‘Metaview Wrapped’.

Step one was coming up with a storyline for our video. This involved some quick querying in SQL to determine:

Once we had a list of our recipients, their key conversational interview metrics, and the storyline for the video, we needed a vessel for delivery. Google slides was ruled out early due a lack of flexibility in animation. Keynote it was (for non-Mac users, Apple’s answer to PowerPoint.)

We next began designing what the video animation would look like within Keynote.

Once the full video was fleshed out, we needed to find a way to populate each video for each individual with their own interview data. There were 1000+ videos to populate so manually updating each Keynote presentation would have been very laborious. Here’s what we did:

We now had 1000+ videos created with each recipient's unique data. Now the question was how would we send them to the recipients?

But before that - we found a royalty-free banger to add as a backing track!

Back to the problem of sending the emails to recipients:

And voila, we had sent 1000+ personalized videos with interviewer data, with less than a couple of days work involved. See the end result below:

We didn’t know if we would be able to run this experiment ‘at scale’ when we first decided to play with the idea of Metaview Wrapped. In the end, our experiment worked out, and we had some fun in the process. Some of our customers quite liked their videos too!

Like this post? Join our team. Metaview is on a mission to power people decisions with the truth. Check out our open roles.

Want to run higher-quality, more consistent interviews? Metaview can help.
Get in touch

This post outlines what separates good and bad interviewers, inspired by Ben Horowitz’s timeless post about what distinguishes good product managers from those that are bad. 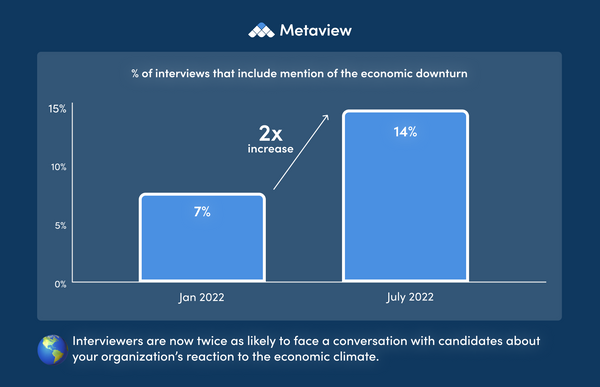 Whether it’s what you’re reading on your LinkedIn feed, discussing with friends, or hearing on the news, talk of the changing market conditions seems to be everywhere. It’