At Metaview, we help companies run amazing interviews. We achieve this in a number of ways including training interviewers with automated interview shadowing and coaching them with personalized, contextual feedback.

To do that we’re building a SaaS application that has many different components and, importantly, a growing number of engineers building it. Choosing an architecture for its backend systems is non-trivial and is critical to our success.

In this post, we’ll explore how we think about the monolith vs micro-services question and how we ended up leveraging serverless.

Throughout my career, I’ve seen products at 3 companies start off with a monolithic style backend application and then transition to micro-services as their systems evolved: VMware, Uber, and Docker.

The driving reasons for moving away from a monolith have always been mostly the same:

At the end of the day, it’s customers who suffer as the product is unreliable, and it takes a long time for improvements to reach them.

The applications are then split up into multiple micro-services based on domain boundaries, each one with its own workloads, database, deployment pipeline, and codebase.

This comes with problems of its own:

Teams then start considering monorepos, common library versions across services, restricting the choice of programming languages and frameworks — things that were a given while operating a monolith.

All the while, these internal migrations, albeit large and costly, don’t impact customers in a direct, significant way.

I would argue that one of the main causes for this journey is the coupling of infrastructure and domain boundaries.

In the monolith world, the whole application is deployed as one piece. In other words, every change is assumed to affect the whole domain, and the infrastructure is scaled accordingly. With micro-services we split up domains and infrastructure in a one-to-one fashion, which is good in a frozen state, but, becomes problematic as the business morphs and the domain boundaries move much faster than infrastructure ones. This often leads to mini-monoliths appearing in a micro-services environment and needing costly migrations to split them up again.

At Metaview, we decided to heavily lean on the serverless paradigm. This has given us different benefits and drawbacks, but, crucially, it allows us to scale each workload independently, deploy changes in whatever grouping we like, and change that grouping in a cheap way. It essentially allows us to reduce the coupling between domain boundaries from infrastructural ones.

To optimize for customer experience, engineer productivity, systems reliability, and infrastructure costs (in that order) we currently utilize the following setup:

This has a lot of the components of a monolith — the monorepo, the shared database, and common library versions. But, it alleviates many of the pain points — workloads are scaled and deployed individually, the local development experience is good, and large code changes are straight-forward. Stacks are very easy to move or create new ones. Costs scale linearly with traffic.

Serverless is much like wireless. Wireless doesn't mean there are no more wires involved, it's just that you don't need to worry about them most of the time.

This setup is very dependent on the organization's size, and we expect to face some challenges with it as we grow. For example:

As it stands, the gains are far outstripping the losses.

In the last few years, we’ve seen huge shifts in how data can enable organizations to hire better, faster, and more consistently at scale [https://link.springer.com/article/10.1007/s10462-022-10193-6#Abs1]. But while we have technology to automate other key hiring 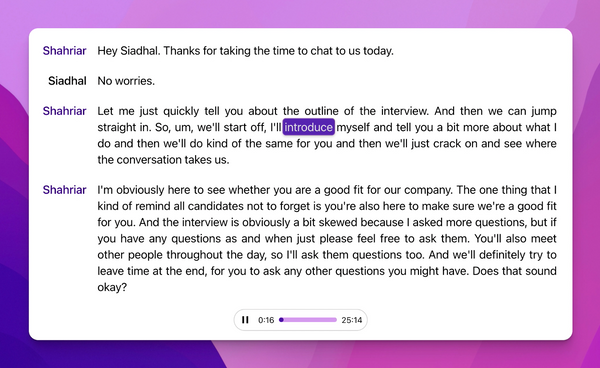 At Metaview, we help companies run amazing interviews. We achieve this in a number of ways including training interviewers with automated interview shadowing, and coaching them with personalized, contextual feedback.