Interviewing is the most outcome-defining point in the hiring process. High-performing interviewers are your company’s frontline defense against hiring the wrong people, but they must also double as the face of your company and ensure that exceptional candidates leave their interviews impressed. Put simply, interviewers determine whether an organization will succeed in identifying and attracting the right people.

Especially at a time when making every hire count matters more than ever, a high-quality interviewing process is a must-have. So how can you be sure that your interviewers are performing at their peak? How can every hire your company makes improve the average? How can your interviewers be trained such that they are truly capable of intentionally identifying and attracting talent?

What to aim for 📈

Effective interviewers are calibrated with the organization’s values, provide in-depth and targeted feedback on candidates, ask questions that test the limits of a candidate’s knowledge, and are aware of the risks of their unconscious biases.

Ineffective interviewers fail to ask appropriate questions, provide weak feedback on candidates, make their decision in the first 30 seconds, fail to understand the requirements of the role they’re helping to hire for, and — above all — they make bad decisions as a result. (For more on what makes a good vs. bad interviewer, check out our post on the topic.)

Don’t we all want more of the former, and less of the latter?

How the most successful companies in the world are achieving this 🎉

The best organizations in the world rely on interview shadowing as the primary way to train interviewers to the standard they require, and keep them there.

Amazon have their Bar Raiser program, where all successful candidates need to be vetted by an objective and trusted interviewer — the ‘Bar Raiser’ — before an offer can be extended.

Google have their independent, data-driven hiring committees that move the responsibility for hiring decisions for the whole company to a relative-few highly trusted decision makers based on the information their interviewers have managed to capture from a candidate.

Facebook’s hiring teams have different interviewers trained on specific competencies. They believe in shadowing so strongly they have based their entire interviewer training program exclusively around it.

In all these cases (and more!), a consistent interview shadowing program lays the foundation for creating the population of effective, aligned interviewers that these processes rely on.

Interviewer shadowing allows trainees and current interviewers to learn and improve skills within the environment in which they will actually use them, not a classroom. It enables trainees to receive feedback based on things that actually happened, rather than theoretical feedback on hypothetical situations. It enables the development of interviewing skills uniquely tailored to the organization and the things that matter to you, not undifferentiated skills that are unlikely to attain a competitive advantage in the war for talent.

What is interviewer shadowing? 👥

Shadowing is when the trainee interviewer wishing to improve their interviewing skills observes another talented/respected interviewer conducting an interview.

As an example, here’s what our interviewer shadowing program looks like at Metaview: We start interviewer onboarding with virtual shadow paths where trainees listen to a series of hand-picked interview recordings so they can observe real-life examples of strong interviews (we use our own product to do this). Then, we do reverse shadowing where an experienced interviewer reviews a recording of an interview a new trainee has led and spends time thoughtfully commenting on it. Finally, we move into continuous improvement where we monitor consistency and quality metrics across interviews ongoing.

How does interviewer shadowing benefit the organization? 🚀

Getting your interview process right depends on equipping your interviewers with the right resources, training, and knowledge to provide a rigorous, consistent and fair process — every time. Once you have a solid interviewer training process with shadowing in place, you’ll see payoff in 5 key areas:

Interview shadowing is by far the most effective way to train your interviewers. The best companies in the world use it to gain advantages in the war for talent and avoid costly mis-hires. Importantly, cutting-edge tools — not least Metaview's Shadow Paths — are emerging to make shadowing more convenient and effective. Metaview’s Shadow Paths let you choose recordings of your best interviews and create virtual, automated training paths for trainees to watch on their own time. Shadow Paths automate the painful manual scheduling and tracking that’s often involved in traditional shadowing processes, and help you keep the bar high by making every interviewer your best interviewer.

If you’re looking to focus more on quality of hire, then there has never been a better time to start your interviewer shadowing program.

Want to run a world-class interviewer shadowing program? Metaview can help.
Get in touch 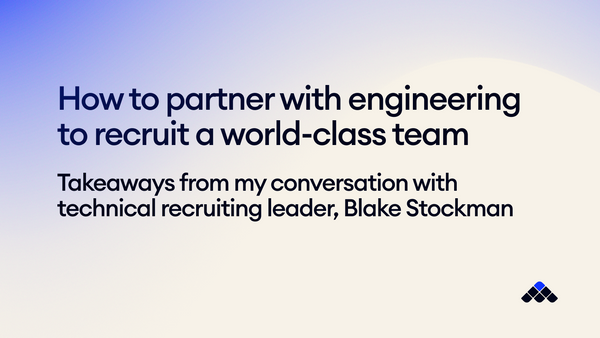 I recently sat down with technical recruiting leader, Blake Stockman [https://www.linkedin.com/in/blake-stockman/], to get his perspectives on what makes a successful partnership between recruiting and engineering 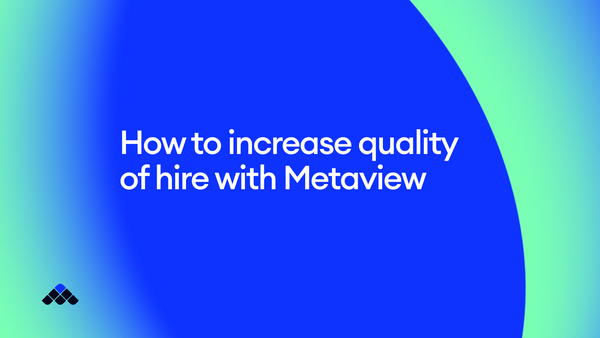 Learn how Metaview can be a powerful tool to bring increased visibility, consistency, and quality to your process, and the all important hires you make as a result of it.